We all know the United States in many facets, but especially for its mythical Route 66. Nowadays, road trips in the USA are very popular on either side of the American coast. The 66 road crosses the country from east to west on more than 4000 kilometers, and connects Chicago to Los Angeles. It experienced its golden age between the 1930s and 50. The popularity of tourists was such that many shops, motels and drive-ins opened all along the road. In the following decades it has lost its superb but today many people come back in search of nostalgia and surprising discoveries. The road-trips moto on the road 66 them, follow each other and keep all their authenticity.

What could be better than to go through this legendary road to the handlebars of a Harley-Davidson, and join this circle of American bikers, the hair in the wind, advancing to the rhythm of the unique whirs of legendary bikes? Along this mythical road, you will meet bikers alone or in a group, dressed in their big leather jackets embellished with symbols and seams of all kinds. The 66 road crosses many Western villages but also long deserts with grandiose panoramas: this is what gives this road this special atmosphere! By choosing one of these bikes, you make sure you are comfortably seated at the front and back to get the most out of an enchanting “made in USA” Ride! And because America is full of surprises, here are our TOP 5 unusual stops not to be missed.

Top 5 Unusual stops on the 66 road 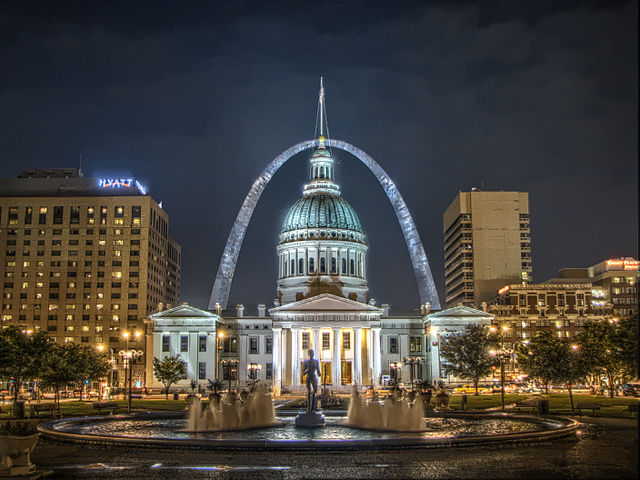 Saint Louis is located 500 kilometers from Chicago, starting point of the 66 road. This is the largest city in Missouri! It is known for its impressive 192-metre high arch dedicated to the conquest of the West. Saint Louis represents the real point of entry to the American West. It is a compulsory crossing point on a motorcycle trip to the USA, to conquer the Pacific coast. This city also houses a zoo, the Magic House or the Forest Park, the site of the Universal Exhibition of 1904.

If you are a gourmet, we advise you to go to the Ted Drewes restaurant. The latter will serve you delicious frozen desserts including the crater of Copernicus! 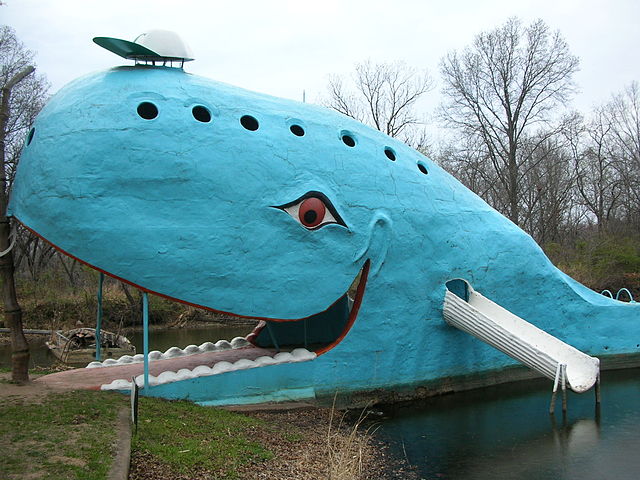 Very famous for its blue whale http://bluewhaleroute66.com/, this small town of 5000 inhabitants will surprise you. The real-size blue whale by Hugh Davids is more than 20 metres long and 5 metres high. It has become the most important monument to family picnics. Kids love it! Admitting of course you choose to go on a motorcycle trip with them to the United States.

For the small anecdote, this whale was accompanied by other attractions such as “Hugh’s brother in Law”, an Indian chief known for his Indian paintings. Today the park has been taken over by residents of the city who care to maintain it. 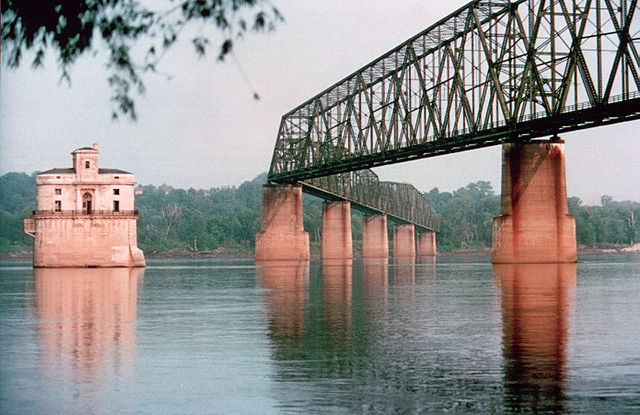 The passage of a bridge can, nowadays, become something very innocuous. However the chain of Rocks Bridge is a bridge that will not go unnoticed. Open to the public in 1929 and takes its name from the river it crosses. After long and loyal services, the chain of Rocks Bridge, which became dangerous for traffic, was closed for the benefit of a new one, towards which traffic was re-routed. However, it is always visible and a walk is necessary, the time to cool the engine of your bike before leaving for new adventures. 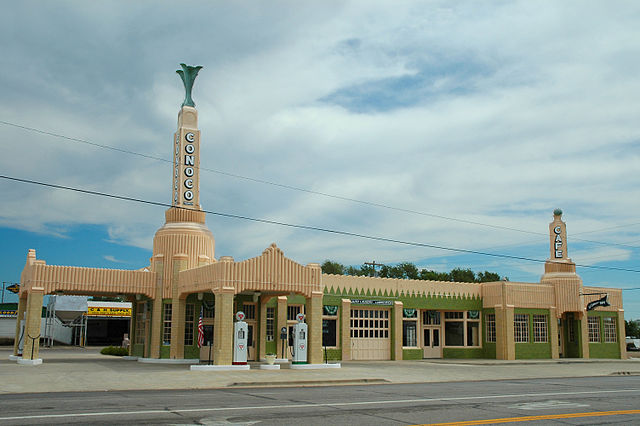 Built of green-glazed bricks and tiles in 1936, the art-modern U-Drop Inn Tower, located at the intersection of the 83 and 66 American roads, is probably one of the most recognizable structures on Route 66. Owned today by the city of Shamrock, the U-Drop Inn received nearly 2 million in federal grants to bring it back to its original shine. Here you will find a souvenir shop, a museum, a visitor centre and even the city’s Chamber of Commerce. 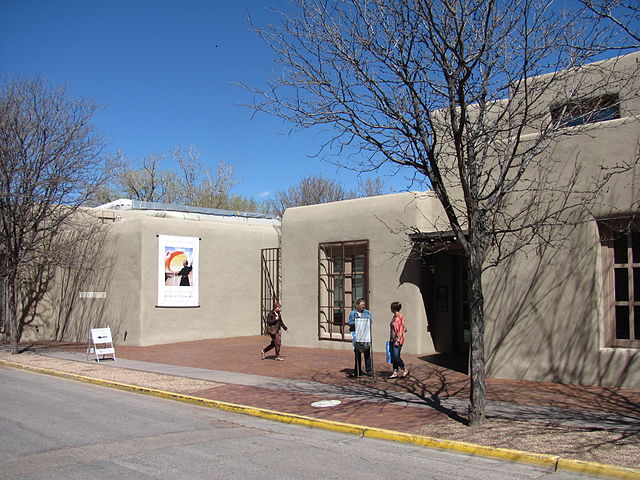 Opened in 1997, only 11 years after the death of internationally renowned artist Georgia O’Keeffe, the houses of Georgia O’Keeffe Museum contain more than 3000 works of art and more than 1000 paintings of its namesake. It is also the site of the O’Keeffe Museum Research Center Georgia, dedicated to the advancement of the study and to the knowledge of the American Modernist Art.

Would you like to conquer the 66 road on a motorbike soon? So check our Moto USA trips and our motorcycle circuit on the 66 road with a local travel agency specializing in destination. And it is with Marcel, real tourdumondiste that you discover this territory filled with history and magnificent panoramas.

For those who want to drive to the US, Planet Ride also offers car tours in the USA. In convertible Mustang, Muscle cars and legendary cars, prepare to feel the zoom engine during these road trips in the USA. It is Alexandra, Marcel’s colleague (motorcycle tours) who takes care of these road-trips by car.

The history of the 66 road

If you would like to learn more about the history of the 66 route, we invite you to read this blog post on Route 66: Golden Age, Decline and renewal. A series of valuable facts and anecdotes for your curiosity. 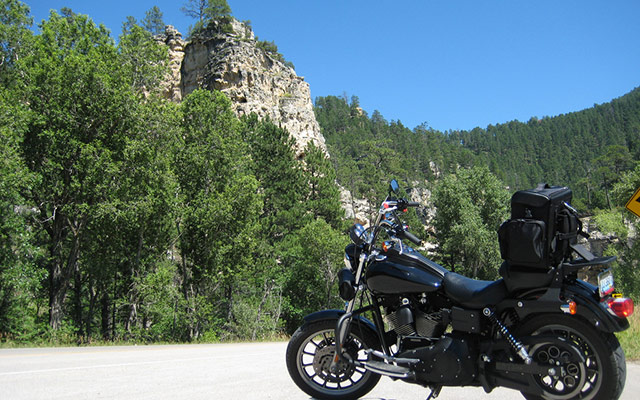 Laurent in Harley in the USA, rolling is a drug 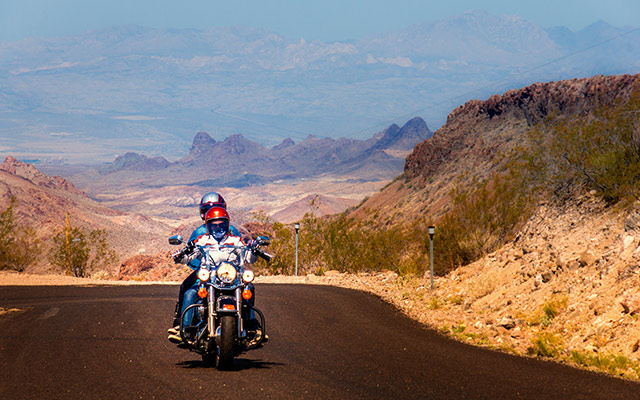 The 5 routes of the USA to do on motorcycles 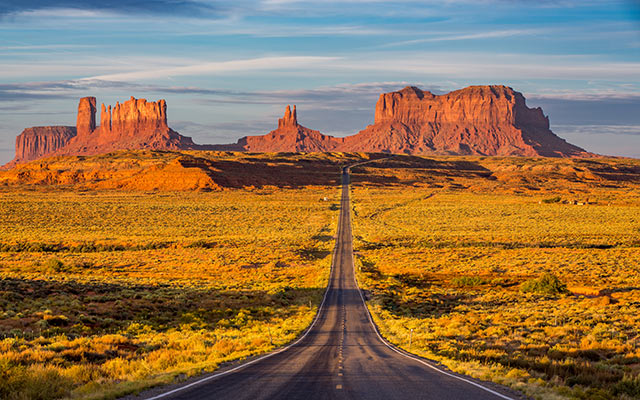