From the Mediterranean coast, through the Lake District, to the Adriatic Sea, Northern Italy invites motorcyclists to discover all kinds of contrasts. The region is indeed full of riches and pleasures: whether on the city side (Genoa, Venice, Verona or Turin) or on the countryside side (Tuscany, Langhe), its gastronomy, its culture or its extraordinary landscapes will please you for sure, the Alps etc). In addition to that, the advantage of the destination is that it allows a change of scenery without having to travel halfway around the world (which is better for the environment).In addition, northern Italy is easily accessible from France!

Here is our selection of the 5 unmissable places in northern Italy: 1) The Langhe and its famous vineyards 2) The Dolomites, a paradise for bikers 3) The Cinque Terre and the charm of its cliffs 4) Lake Como and its neighboring mountains 5) Cortina d'Ampezzo and its vertiginous passes 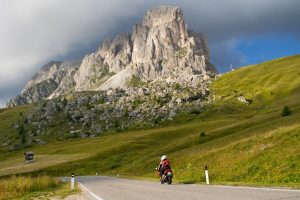 If for you Italy rhymes with Vespa, pizza and Roma, then beautiful surprises await you. Discover wonderful places to see in southern Italy during your motorcycle road trip.

This mountain range is a real paradise for motorcyclists. Located about 70 kilometers from Palermo, it is part of the chain of the Sicilian Apennines. Its massif is the second highest point on the island after Etna. In addition to the roads and serpentines, the fauna and flora of the Madonie is precious.

This volcanic island is full of often underestimated natural beauty. A land of fantasy, Sicily knows how to protect its mysteries and attract bikers.Its unique culture, history and foreign influences make it an amazing place. Add to it the taste of the party and the sweetness of life, and you will understand why you no longer want to do without it! To visit Sicily is to find yourself in the middle of its volcanoes, including Etna, the highest and most active in Europe. It also means getting lost in its verdant and astonishing natural parks and reserves, strolling through its impressive gorges and strolling along its heavenly beaches .Discovering its mythical cities like Palermo, Syracuse, Agrigento or even Trapani and their ancient remains is also a must.

Touring Sicily on a motorbike includes many basic stages, among which Palermo and Taormina are not to be missed. The first route that can be traveled by motorbike is in fact the one that starts in Taormina and ends in Palermo. After a few days in Taormina, you can go to the Etna region and why not stop for a few hours to visit the Cathedral of Zafrana Etna . Then dedicate a full day to the volcano before heading to Cefalu , the perfect Sicilian capital to spend a few days there. Not to be forgotten, the city of 'Agrigento and the famous Valley of the Temples, Ragusa and Syracuse. 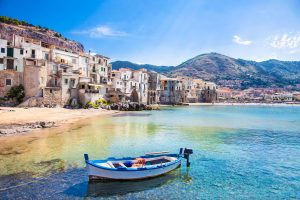 Our expert advice before you leave:

Sardinia is an authentic island, still little known, which will surprise all types of bikers. Due to its warm welcome and its fantastic unspoiled landscapes. Sparsely populated, it offers nature an important place. Crossing the island by motorbike will allow you to contemplate grandiose and varied panoramas. What a pleasure to explore its wooded valleys with a thousand scents or to land, during a motorcycle ride, in a cove with fabulous turquoise waters. 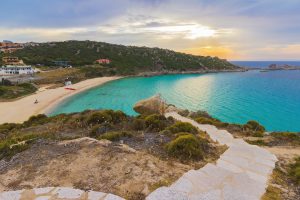 When should you take your road trip in Sardinia?The most suitable answer to do a motorcycle tour in Sardinia is to go out of season. Why ? To obviously have fewer people on the roads. The weather is also important, it is especially important to avoid the heat. Going on a trip to Sardinia in the off season is not the best either. Indeed, many restaurants and accommodations will be closed. It's best to leave beginning of October , Where end of September.Or on the contrary, April May Where June are also good times.

But then, which roads to take on a motorcycle?

Alghero-Bosa coastal road The favorite destination for bikers: 45 km of pure pleasure. The road is a series of curves and straight lines that lead directly to the northwest coast of Sardinia. An emotional concentration, a feeling of absolute freedom.

Panoramic route from Cagliari to Villasimius The Villasimius coastal road is one of the most beautiful panoramic roads in Sardinia. Among other things, the most beautiful beaches in Sardinia are concentrated in this part of the south coast. The intensity of the colors is surprising: from the blue of the sea to the brightest green of the Mediterranean maquis.Baunei-Dorgali SS 125 On the central-eastern coast of Sardinia there are some of the wildest and most impressive landscapes: you are among the majesty of the Supramonte mountains, the silence and the most unspoilt nature typical of this region. The limestone massifs draw an almost lunar landscape. It is necessary to enjoy this road calmly, to breathe the air of the mountains of Barbagia.

Chia-Teulada Panoramic road SP 71 between Chia and Teulada. This section is located in the southwest of Sardinia. 25 km of absolute beauty. Lots of coves, white sand beaches and crystal clear water. The route is filled with slightly more inland paths and stretches that almost literally touch the sea. Our itinerary ideas: