Who has never dreamed of going on a motorcycle tour in Corsica during their holidays?With Corsican roads renowned for their hairpin turns, zigzags, climbs and steep descents, driving here can feel a bit intimidating at times. However, if you remain attentive and observant, you will be rewarded with an opportunity to enjoy breathtaking views.

Corsica is often called of “mountain in the sea”. These two words could sum up all the pleasures that come here for the bikers who frequent the island roads every year. Between its paradisiacal beaches, its snow-capped mountains, and its winding roads, Corsica is a true paradise for bikers. A road trip in Corsica requires a minimum of organization, which is why we help you by making a selection of the best roads to do during your stay.

The Cap Corse tour: North of Bastia, you will find Cap Corse which offers spectacular landscapes. 50 km long, the Cape is a jutting out onto the sea, a point rocky and jagged that we follow all along the route. Many bays, very little frequented, allow you to bathe in clear water. Cap Corse is bordered by small fishing ports, villages and very charming churches. The D80 serves as the main road. We advise you to go around Cap Corse from east to west, in order to make the most of the beautiful daylight.

You can make a first stop at Erbalunga. It's the perfect place to have a morning coffee and stroll through the small harbor, with its brightly painted fishing boats and historic Genoese watchtower. 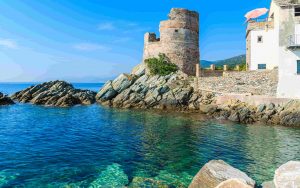 Continuing on the D80, you will see in height a very beautiful white mill with a conical roof in red tiles, it is the Moulin Mattei. Up there you will be rewarded with breathtaking views of the sea and the environment in all directions.

The village of Nonza is also a must. City perched on a rocky peak crowned with the paoline tower, Nonza is an essential stopover in Cap Corse. It is a village concentrated around the Sainte-Julie church, patron saint of Corsica, which rests on a land steeped in history.

If organization is not your strong point, go to the conquest of treasures Corsican with the discovery of Cap Corse co same first th stage.

The famous D81 of the West For those who do not know the northwest coast of Corsica, a road connects the towns of Ajaccio and Bastia via Calvi: the superb D81. This winding and steep departmental road is punctuated by breathtaking landscapes which delight many bikers as soon as the sunny days appear. Going down to Calvi, a stop in Saint-Florent is a must. For the greediest, you will appreciate the wine route of the Agriates region. A short stroll that will make you discover the 33 estates over nearly 5000 hectares of the Saint Florent-Agriates region where the owner will offer you a small tasting, which will allow you to fully appreciate the authenticity of its wine. know how.

The next stop on this journey is the Agriates desert, thanks to the D81, it offers a view of its highest peaks in Corsica. The Agriates desert has an arid microclimate over 40 km of sandy desert and an unspoiled coast, visible from space. You will not find a city or a house except along the road, as the desert is an impenetrable environment. As you get closer to the coast, the terrain becomes softer and lighter and gives way to a much more lush landscape. 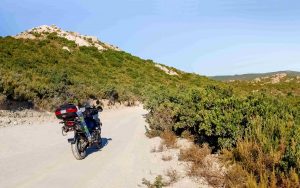 If you want to continue this adventure along the D81 road, you will arrive at Île-Rousse. Its beaches are among the warmest waters in Corsica. Île-Rousse owes its name to the Île de la Pietra, the rocks of which are tinged with red in the setting sun.

For the more adventurous, we advise you to do the great tour of Corsica in enduro , an adaptable circuit for all levels on off-road routes.

Routes from Porto to Piana To admire the Calanques de Piana by motorbike, follow the D81 corniche road between Porto and Piana and enjoy 12 km of the cliffs that plunge into the turquoise blue Mediterranean waters. There are several places along the scenic stretch, where you can stop to admire the beautiful scenery. The best time to admire this rugged terrain is at sunset, when the rock formations take on a vivid red hue that casts deep shadows over the landscapes of this supernatural world. 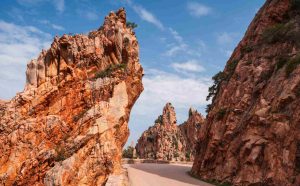 The southern roads from Ajaccio to Bonifacio Difficult to resist the appeal of the South … This week-long course will offer you the best of seaside pleasures, in the always sumptuous setting of the southern gulfs.

After visiting Ajaccio and its surroundings, head south towards Agosta beach and continue on the D155 to reach the north shore of the Gulf of Valinco. The road winds through the maquis to Porto-Pollo, a pleasant route for bikers.

Taking the T40 will take you to Propriano. Go down to Sartène, where the Corsican soul hides in the alleys of the old town. Still further south, you can take a small detour to the prehistoric sites of Sartenais, then stop at Tizzano, a coastal village at the end of the world. Then head west to Bonifacio, from where you will join, as part of an excursion, the Lavez archipelago zi, a protected paradise, bathed in translucent waters. Looking for authenticity? The road trip on Corsican village trails will seduce you.

Also discover this Mediterranean island that is Sardinia. Located in the heart of the Mediterranean, Sardinia is an essentially mountainous region, without very high peaks, it offers bikers a pure and unique environment, both harsh and gentle.
Share on Facebook
Share on Twitter