Focus on Anne-France DAUTHEVILLE: The first woman to have traveled the world on motorcycles

Anne-France Dautheville is known to be the first woman to have travelled the world solo, on motorcycles. What is certain is that this is the first to have transcribed his adventures into narratives. Woman motorcycle, the winning combination.

"To be Happy" was Anne-France's first will in 1968 when she acquired her first two wheels. Originally an advertising writer, then a journalist and writer, his desire to discover the world has increased considerably over time.
In order to know more about this unusual woman, we asked her a few questions about her motorcycle ride and her many experiences… 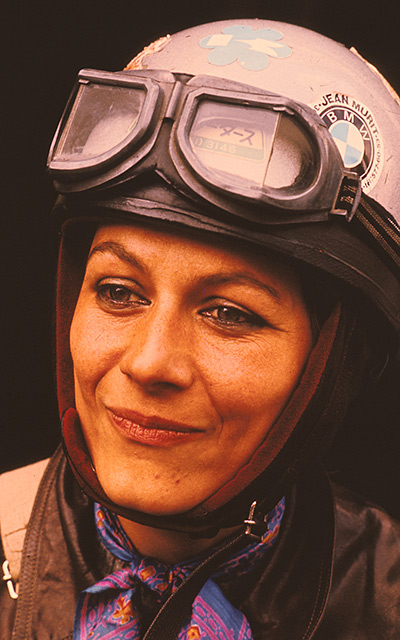 What pushed you into your passion for the bike?

"I was too stupid to have the car license, so I bought my first motorcycle without a license, rue Montmartre, in 68. It was a Honda 50cm2. I then left alone for my first trip on the French Riviera. "

Why do you always want to travel alone?

"My first trip abroad was my first East Raid. And then I realized that I was made to travel alone, and that I even needed to be alone. If I had gone with someone, I would have paid too much attention to the person who would have accompanied me and it was not available for the people I met. " 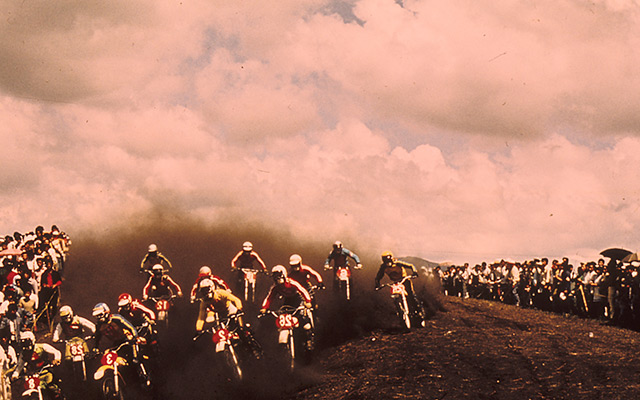 Have you ever encountered any problems while traveling alone with your bike?

"It was easy! Obviously, you have to hold the bike when there is a bad track, go back on when you have broken your face. Finally there is a form of character that goes with that too, you have to be made for that, to be stubborn.

As for mechanics, the less you touch it, the better! When I had a mechanical problem, I was waiting for a pickup truck, I had the bike on it, and then I was going to fix it a little further. An example during my motorcycle world tour, when I arrived in Japan, the Kamat factories completely revisited my engine, because I was heading back to India on some very simple roads. They completely dismantled and reassembled the engine and put a piston clip in the wrong direction. After 250km in India, he cut himself between the cylinder and the piston. So I put the bike on the train, I brought it back to New Delhi where there was a French embassy, I brought in parts from France, we reassembled the engine and then point bar. "

Have you experienced any memorable falls during your motorcycle road trips?

"On a photo of Chloe's website I'm sitting on a motorcycle, in the sand. I gameléed like crazy during the East raid, on a runway north of the salt desert in Iran. And since I couldn't ride the bike by myself (too heavy), I sat on it and waited. A truck arrived, I stopped it, and I made it clear to the men of the latter that I had fallen and that I wanted to be helped to reassemble the bike. They came down, they saw that I was a woman and they pushed a howl of terror! They immediately got back in the truck and left. When the following went by I suggested we take a picture!
I fell seven times during the East raid. And being next to his bike that you can't pick up is putting yourself in danger. You always have to have an emergency exit. " 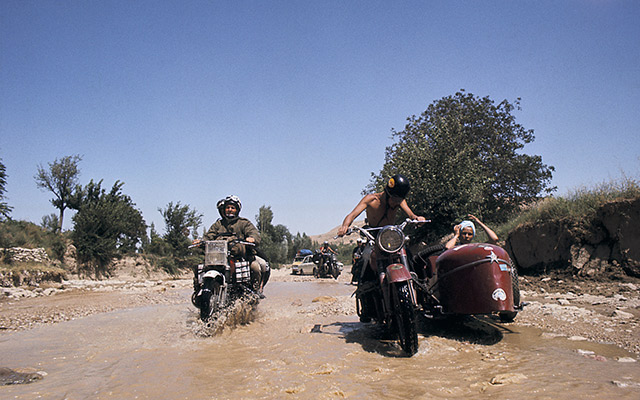 When is the best time to take your motorcycle trips?

"In Bamiyan, Afghanistan, during my tour of the world, I rode on the head of the Buddha. The whole cliff where the Great Buddha was, was in fact a monastery where Buddhists monks used to live. Inside the cliff, there were stairs, lodges where the monks lived, and halls with frescoes on the walls. And at the top, on Buddha's head, there was a sort of terrace. I climbed there as the sun descended on the Bamiyan valley. And I think it was one of the most beautiful moments of my life, so it was beautiful, so it was peaceful, so it was far away. That was magic. 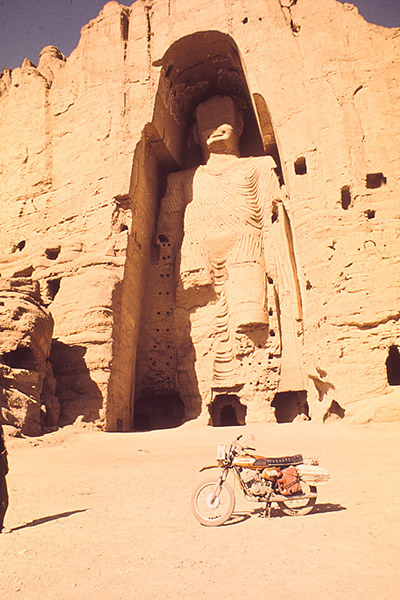 In South America there have also been fabulous moments, especially in Cusco. When I got there, I said to myself: it's not possible that I have the right to be there, it was fabulous. I spent some magical moments walking around in France too, it's such a beautiful country. I remember the crossing of the Landes Forest, where it was extraordinary. There was a light in the trees, it was peaceful, there was no one there. I really need to be alone. "

Do you continue to ride a motorcycle and travel?

"I had to sell my bike last spring. I had a big car accident four years ago and I had my arm blown up. This is the first time I had broken bones. I kept the bike and told myself that I was going to get back to it, but I never recovered. I wrote a book about my convalescence at Avicenna Hospital. It was a real adventure for me, patients and caregivers come from different cultures. I consider this story to be a real travel book. It was magical that we all get along in spite of our disparities, and to just find our likenesses. This experience has resumed my wonders with motorcycles in a different way. It is as if life gave me new trials to see if I had understood the previous teachings of my life, especially acquired by my travels. " 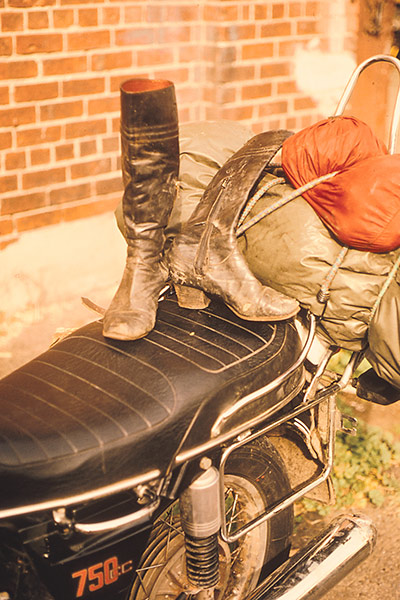 If you were to make a final motorcycle trip, where would that be?

"I would love to do Iceland on motorcycles, Norway or Finland. When I stopped the big trips in 81, I told myself, the little trips is for after. I made a lot of small trips as a journalist but I didn't have any money. And to get up in the northern countries, it takes money. I no longer want to camp, and the hotels are expensive. Everything is expensive. And then I was caught in my books too.
I have never been to China, and I would have liked it very much. I didn't go to Russia either. Originally for my tour of the world, I wanted to go there and redo the journey of Michel Strogoff: from Moscow and go to Irkutsk. So I went to the Russian Embassy and a gentleman, who I believe was called Ayzanov, a press officer, received me very politely. And when I told him that I wanted to do this on Moto he replied "Ah no it is not possible". I asked him why and he replied that there were no roads. So I told him that the Transsiberian was passing by and that there was a maintenance road along the rails. He said it was really not possible because there were bears! " 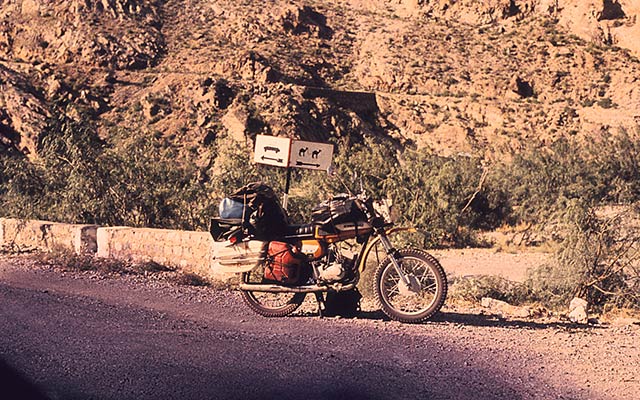 What was your limit on the travel you were undertaking?

"I had only one limit: it was the money. I must say I was leaving at my expense. I used to borrow motorcycles at that time, and importers also lent me equipment. On the other hand I did not get paid by anyone, especially for reporting, in order to be free of my information. I was actually regaining the money I had spent on the road selling reports on the way back. For example for "Moto Journal" or "Motorcycle Revue", and in general the "Cosmopolitan". I also had a contract for a book so it allowed me to get into my expenses. These days it wouldn't be possible, I think, to work like this. " 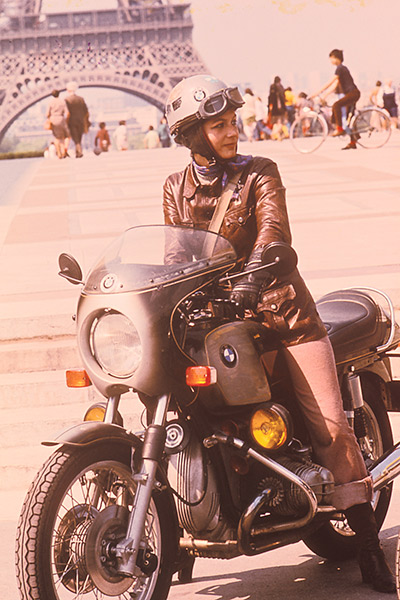 What do you have to say about the image of the woman on a motorcycle in your time and today?

"The female motorcycle girl at that time, it didn't exist. To use an example similar to that of the three bikers in the desert, one day I was driving my bike and a guy made me a fish tail. I advanced to the fire to tell him what I thought and he opened his window. When he saw me, he was surprised and turned to his buddies and said, "Damn, a traveler!" A girl on a motorcycle is always a little exotic. But at the time there was also a lot of curiosity. Seeing a single woman roam the world: it couldn't be scary. There was even a duty of hospitality and respect towards the woman alone. Maybe it's changed these days. " 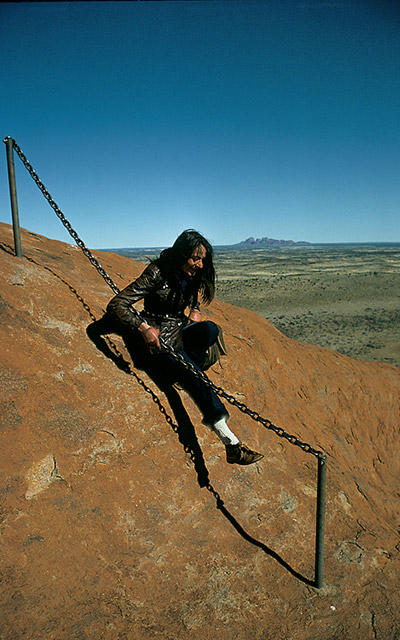 All of Anne-France Dautheville's travel books will be put online next year in the lending library. To know more about the extraordinary adventure of this seasoned biker.