The Atlantic route named Atlanterhavsveien in Norwegian is a unique section of the 64 national road and was inaugurated in 1984 after 6 years of work. 8.2 kilometers long and crossing the ocean, it connects the towns of Eide and Averoy located in the northern part of the coastal zone of Hustadvika. The road, which has been built on several small islands and reefs while borrowing roadways and viaducts, stands out by its tight curves and pretty curved corners.

We travel from island to island through eight bridges, including the Storseisundet Bridge, known for its impressive optical illusion. The latter being so abrupt, that it gives the impression to those who commit it that it does not lead anywhere. It is also known as the “Drunken Bridge”. The road winds through the ocean with a beautiful scenery. Attention however to unpleasant surprises, during bad weather, large waves can cross the road. 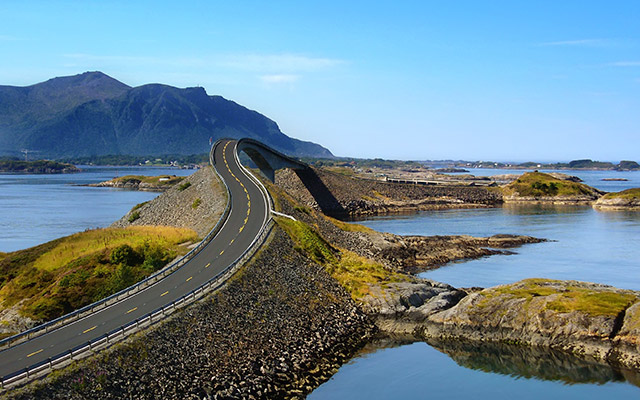 For those who wish to venture, the road promises a few shivers! The bridges will make you think of roller coasters. Indeed, the latter rise and fall, offering a breathtaking view of the sea and its rocks, the fjords and mountains located nearby. You will see fishermen, cane in hand, waiting for the fish, on fishing pontoons specially arranged on either side of the road. You will even be able to spot whales and seals on the days of good weather.

Be careful, it is forbidden to stop in the middle of the road because the bridges are very narrow. Nevertheless, you will find several parking lots of what to pause the time of some souvenir photos and enjoy the salty air while admiring more closely this magnificent expanse bluish! Notice to amateurs, the views during the storms are impressive. 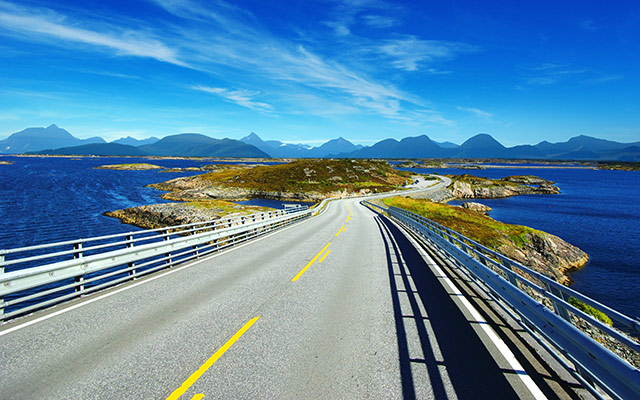 An adventure between coastal landscapes, culture and history to do at least once in his life! Besides this portion, the road offers many stops with a splendid view of the ocean, it houses hidden houses in the middle of a wild nature. The Atlantic route has become Norway’s flagship attraction. It was voted “Norwegian construction of the century” on September 27, 2005. Tourists venture there especially in autumn, because the sea is more agitated and offers incredible sensations. Venture on this spectacular course during a road trip in Norway!

Discover the lunar landscapes, beaches of fine sand, museums and treasures hidden during a road trip in Norway in camping car, motorbike or car!