A 25-year-old student, Alexandre embarked on a crazy project, traveling South America on a motorcycle. For 5 months and a half he went to travel the most beautiful roads of different countries. He shares with us his marvelous adventure. 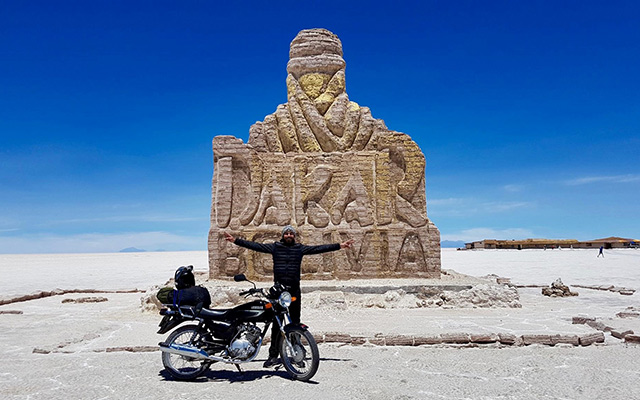 Can you introduce yourself in a few words?

My name is Alexandre, I am 25 years old and I am a business school student. I am passionate about travel, I recently created a YouTube channel “Alex Travels” to share my adventures.

How was your road trip project motorcycle born?

To tell the truth I am fascinated by motorcycles since always. When I was little, my biggest dream was to have a scooter. I realized it at the age of 14, with 130 euros in my pocket I bought my first moped. Since my passion has only grown and my dreams cost me a little more. The idea of ​​one day being able to fulfill my passion for motorcycle travel was born in 2014 during my trip to Indonesia. I went there when it was not planned, I was in Australia for 1 year in order to learn English and like all backpackers I decided to take the opportunity to go to Bali. But then, I was traveling alone and it was very expensive to take a taxi to visit the island, so I found an alternative and I rented a Kawasaki Klx 250 to travel the roads for 1 month. From there was born the idea of ​​a future great motorcycle trip …

Why did you choose to go to South America and why on a motorbike?

If I made this choice it is above all thanks to a friend that I I met in Australia. One night we were at the hostel and he handed me his USB key, he wanted me to watch a movie, THE FILM according to him. This last tells the story of two friends left on a motorcycle to discover the South-American continent. This film is of course Carnets de Voyage. The next morning when I returned his USB key, I told him that one day I too will cross South America on a motorcycle! He looked at me smiling … 1 year and a half later I had just had my Bachelor and I wanted to travel to learn Spanish before continuing my studies in Master. I thought it was a good time to follow in the footsteps of Ernesto Guevara. 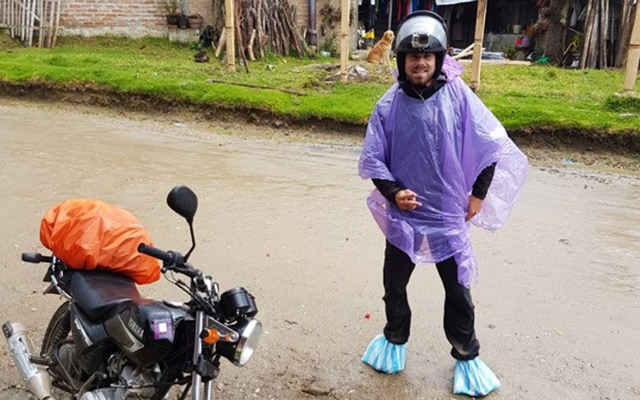 With what vehicle did you leave and why did you choose this one?

I chose a Yamaha YB 125cm2 to meet several essential criteria. First, I did not have a big budget, less than 900 euros to buy the bike and believe me it already limits you a lot the choice. I was also looking for a reliable bike with low fuel consumption. I also needed to be able to find spare parts in any country. My choice was wise, because I did not encounter any mechanical problem in 13 000 kilometers, Yamaha is solid !!

When did you leave and how long?

I left in September 2016, after having worked as a bartender all summer, with a one-way trip Paris – Rio de Janeiro! I did not have precise return dates, I just knew that I had to be back in France in March to be able to pass my competitions. In the end my trip lasted 5 months and a half. 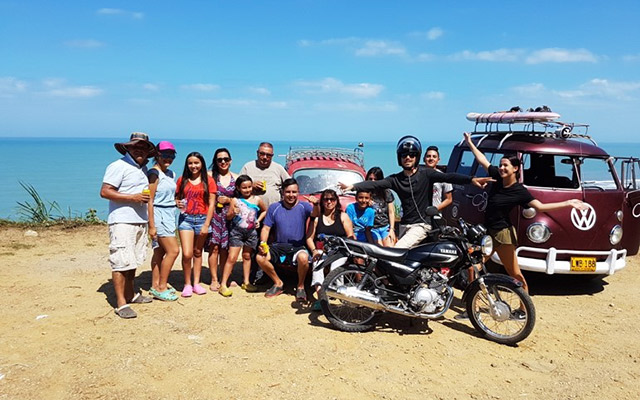 With whom did you leave ? Did you have a travel partner?

I left alone, all my friends were busy at this time, none of them could be released to accompany me on such a long trip. It did not bother me, it was already the third time I left alone. I got used to it, it’s not necessarily easy at the beginning and it can be scary but once we have gone beyond this cap it’s great, especially in the end it’s only being that the l we meet the most people. Chance is so good that I met my girlfriend in Colombia. She too came from France and traveled alone. We met in Santa Marta on the Caribbean coast and we shared a piece of road together to finally put us in couple. Today we have plans for motorcycle road trips in common. Ahhhh the magic of the trip …

How was your road trip? What was the itinerary? The different stages ?

I left Paris to go to Rio de Janeiro, as it was the cheapest flight from Europe to South America. From Brazil I joined Paraguay by bus, because from what I had read it was the cheapest country to buy a motorcycle. Then, since Asunción I went to the north of Argentina, to San Pedro de Atacama in Chile, to Uyuni and La Paz in Bolivia, to Puno, Cuzco and Lima in Peru, to Iquitos in Amazonia, I continued my trip to Ecuador, in southern and northern Colombia is the whole country and finally in northern Venezuela.Before leaving I had prepared a “bucket list” of everything I wanted to see! crossed 7 countries on a solo motorcycle “from Paraguay to Colombia” and traveled no less than 13000 kilometers in 125cm2, I still have pain in the buttocks! 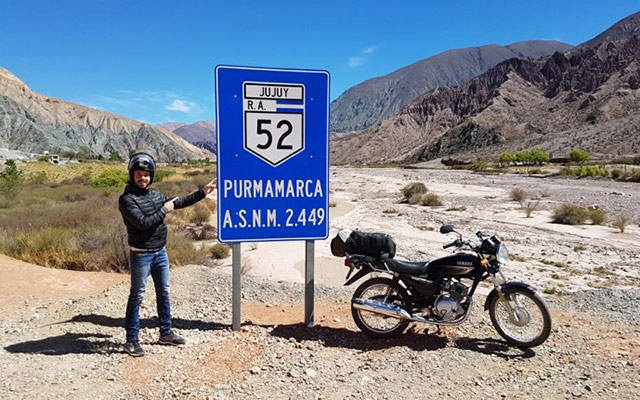 Was the trip complicated to organize?

How did you manage that? To be completely honest, even when I arrived in Paraguay last October, I was not sure I could do my project. I had obviously researched from France several months before departure: I called the embassies of several countries, asked several questions on different forums, contacted people who had made a similar trip to motorcycle in South America .. In the end I did not get any clear answer on the procedures and the possibility of buying a motorbike to travel all over South America. My previous trips helped me a lot to organize this road trip in the best way. motorbike. At least what was possible to organize upstream that is to say: – The preparation of the backpack (I left with a backpack of 35 liters weighing less than 8 kilos, including computer equipment ). Free, mobile, space-saving on the bike, no extra cost for the plane, as it returns to the cabin.- The preparation of an “ideal route” from France, which can be feasible in terms of budget and time. It was clearly the two hardest constraints to manage in the management of this project.I also thought about the possibility of applying a plan B, that is to say to make the same trip by bus, if ever I could not buy the bike. Must see tourist places, standard of living in each country, for budget, security, the number of kilometers, roads … For the rest it was pure “freestyle” with a good dose of luck. I arrived in America from South with a vocabulary limited to three words: “Holà, que tal?” a little fair to negotiate the price of a motorcycle and make the administrative steps to different organizations. Technical control, prefecture, registration of the vehicle, notarial act, registration and so on … Explain to the seller that you are French, that you want to buy a motorcycle 125cm2 to cross the South American continent to go to Colombia it becomes quickly complicated.Imagine a Peruvian who does not speak French and who would like to buy a motorcycle to go to Beijing? But I managed it by force of determination!

With the accommodation how did you do?

I tried the couchsurfing about 4 or 5 times, especially at the beginning, but it became a little more complicated to manage afterwards because I never really knew where I was going to be, or for how long. So I continued to sleep in a youth hostel as I used to do before. Especially in most South American countries dormitory night is not very expensive, 6 euros on average. I also had a hammock that I could use a few times to sleep under the stars, when the weather allowed me. I also slept in a hammock in a merchandise boat to cross the Amazon for 15 days in total, 5 days between Pucallpa and Iquitos and 10 days between Iquitos and San Sebastian Del Coca, surely one of my most beautiful experiences, humanly speaking. 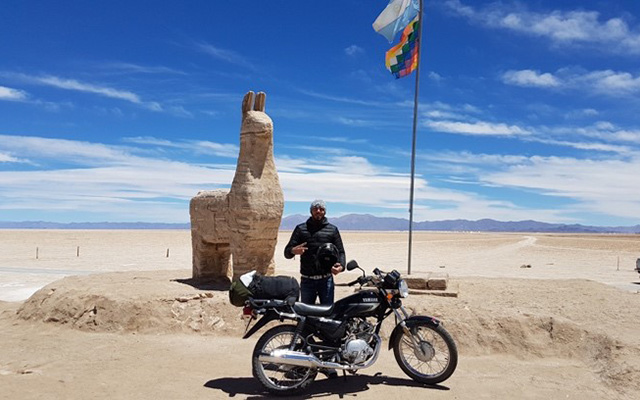 Have you had a crush on a particular place?

This is often the question people ask me, but it’s really hard to answer … How to choose between the Iguassu Falls, the salar from Uyuni, Machu Picchu, the Amazonian jungle, the Caribbean coast in Colombia …. And well beyond the landscapes, I met so many people with whom I shared great and unforgettable things that it is impossible for me to choose a place or a moment in particular.

What message would you like to pass to future road tripers?

Go on and live your dreams !!!

I would like this experience to make every young person want to realize their dreams, whatever they are. Everything is about will and dream! Here is a glimpse of this beautiful adventure!