Currently on a trip to Northern Ireland, Eline delivers his first impressions and favorites on this famous destination for its green landscapes.

Planet Ride gave me the taste of the trip. Having never actually travelled abroad, it was important for me to take the big step and discover a new culture. Why Northern Ireland? I have long hesitated between the Republic of Ireland and Northern Ireland. Personally, the financial aspect helped me to decide between the two. But a trip to Dublin is obviously on the agenda! Currently traveling in Northern Ireland, I share with you my top 6 places not to be missed.

1/The City of Belfast

The capital of Northern Ireland, Belfast attracts many visitors. Just walk around the city center to realize it. Belfast is an attractive and tranquil city at the same time. It’s very nice to walk around, even if it’s better to stay safe in front of bikes and cars. Pedestrians do not have priority in their highway code, so stay alert. City Hall is a landmark in central Belfast. This building is also captivating by day and night with these lights. It is possible to visit it for free. 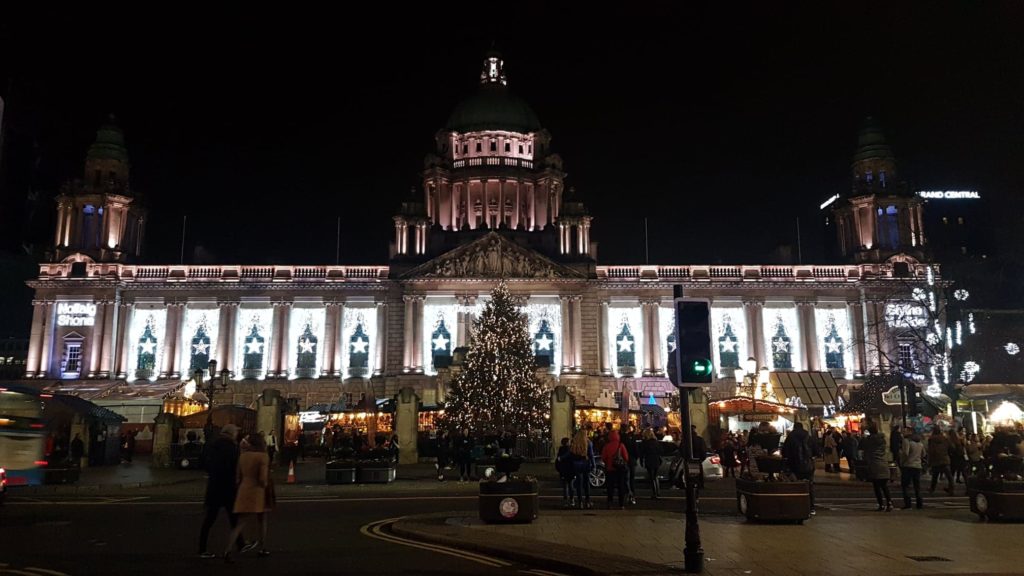 But what better than the Irish pubs for total immersion! The atmosphere is undeniably incredible, between the dark parts and the Irish songs played by local bands. Anyway, a treat to spend the evenings. Note that the party will start earlier here and end at the closing of the bars, i.e. 2h in the morning… 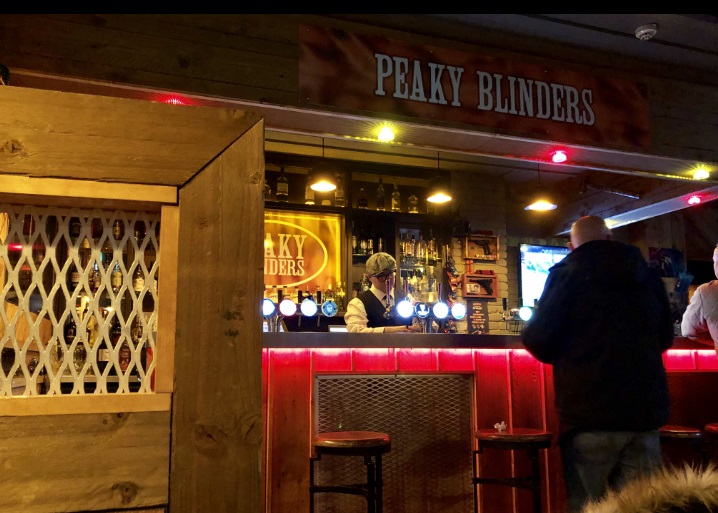 With my troop of travelers, we decided to go on road trip to discover the Irish coasts. The place to be missed is the giant causeway (Giant Causeway), located about 95 km from Belfast. The road leading to the site is just as spectacular. We borrowed roads bordering the Irish Sea and the landscapes are breathtaking! Throughout the journey, I was constantly captivated by the different viewpoints of the curves on the green cliffs. The raid is all part of the experience and I keep a great memory of it. 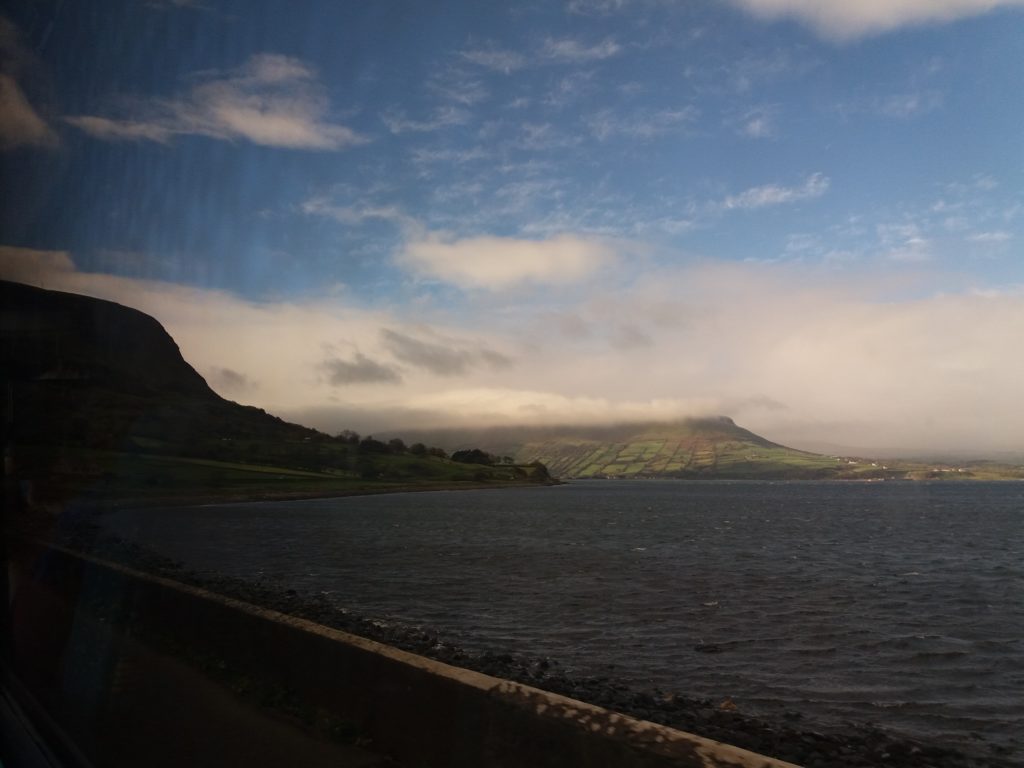 When we arrived at the giant Causeway, we left our motorized excursion aside to walk. Before arriving on the site, count about twenty minutes walk and enjoy the view to take some shots of the ribs. The driveway is rather nice, with a great downward slope. But hard not to think of our little legs for the return… However, for the most lazy, a shuttle is available.
We then arrive at the Giants ‘ causeway and it is simply sublime. Thousands of vertical columns form like steps to the delight of the visitors. So it is easy to venture even if some are not very stable. 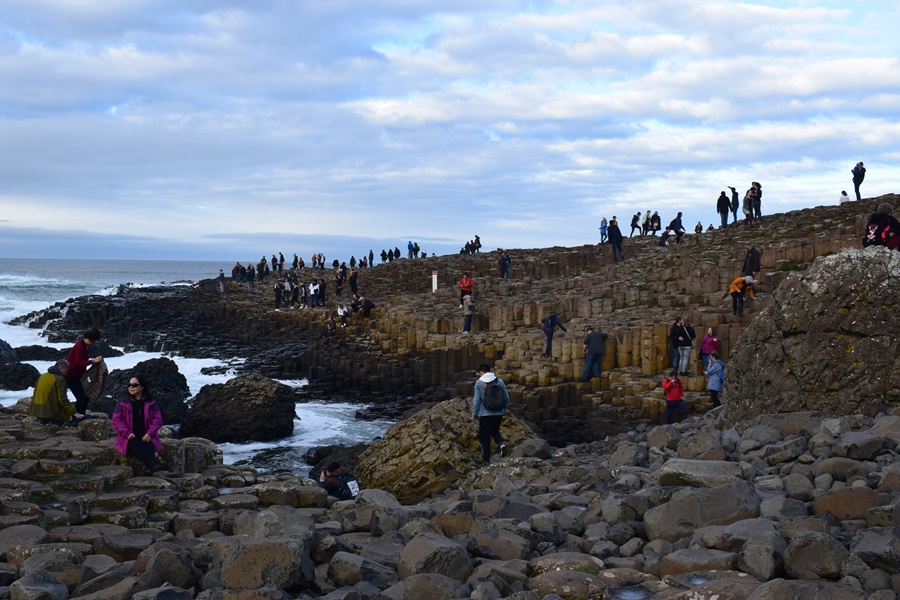 Did you like the Titanic movie with Leonardo Di Caprio? So don’t miss the visit to the Titanic Museum in Belfast. This museum, entirely dedicated to the most famous liner in the world, perfectly traces its history, from its construction to its tragic shipwreck. Why in Belfast? Well, because this is where it was conceived! 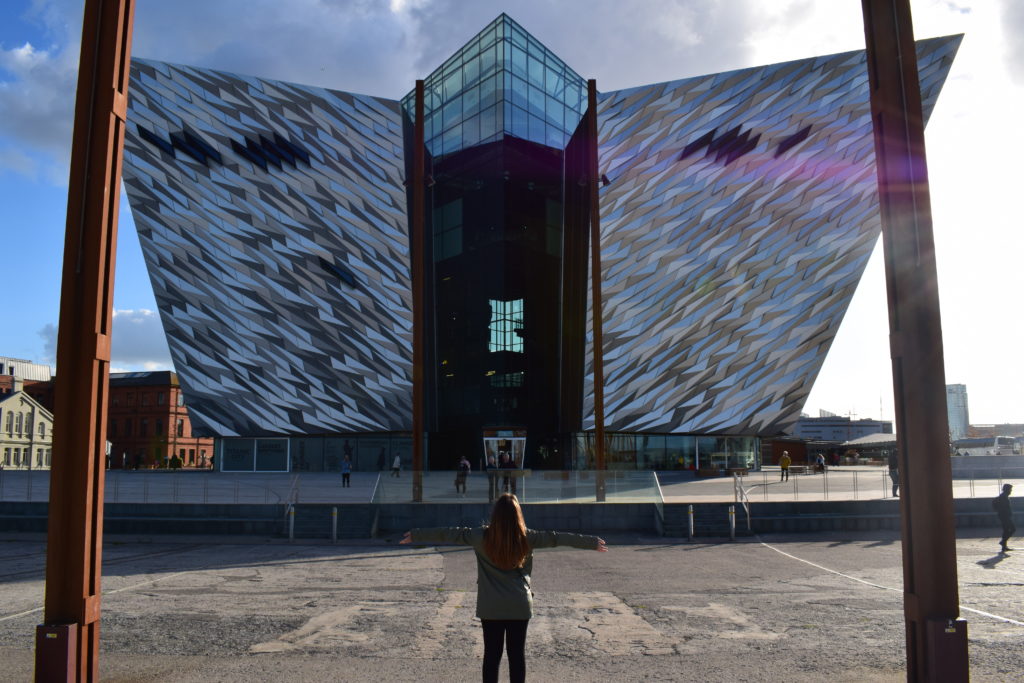 Inside, you will have the opportunity to admire exact replicas of the first and second class cabins. You will also find objects found on the boat after the tragedy and an exact replica of the lifeboats. What I also appreciated is the part about the filmography dedicated to the history of the Titanic. The film directed by James Cameron is far from being the first…

If you are a fan of the Game of Thrones series like me, be sure to make a stop at “The Dark Hedges” on your trip to Northern Ireland. This Beech alley forms a kind of tunnel. It is found in the second episode of Season 1 of Game of Thrones, “the King’s Road”. For my part, I found this alley as murky as spectacular. I advise you to visit the morning in order to avoid the crowd. 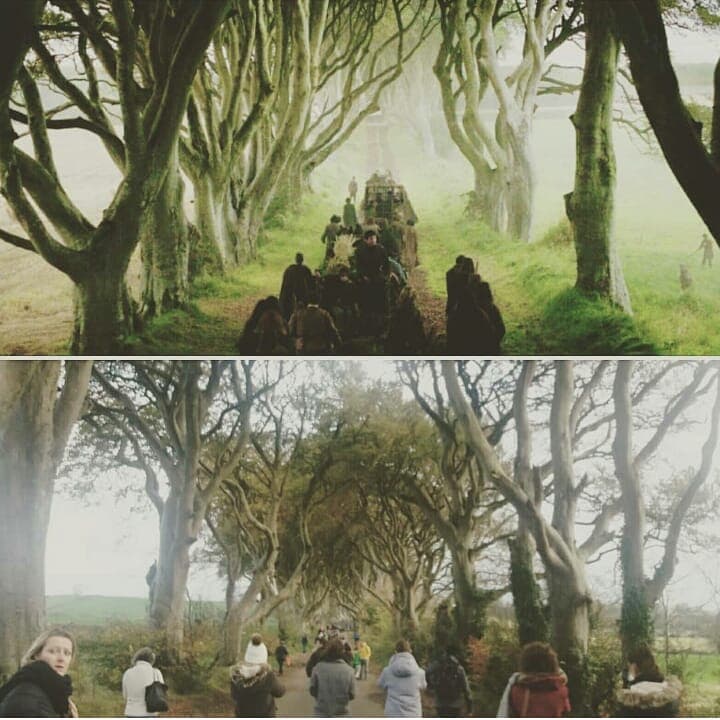 In County Antrim, the Carrick-a-Rede rope bridge is not to be missed. This bridge was formerly built for fishermen before becoming an inescapable tourist attraction in Northern Ireland. To cross it, Count £5.60 per adult. For my part, I was very quickly demotivated by the huge queue of tourists waiting to cross it. So we chose to enjoy the view by staying on the cliff side and all that for free. Only the crossing of the bridge pays off. So we strolled along the coast and the view is just as magical. Luckily, we had a beautiful ray of sunshine at that particular moment. Here are some pictures: 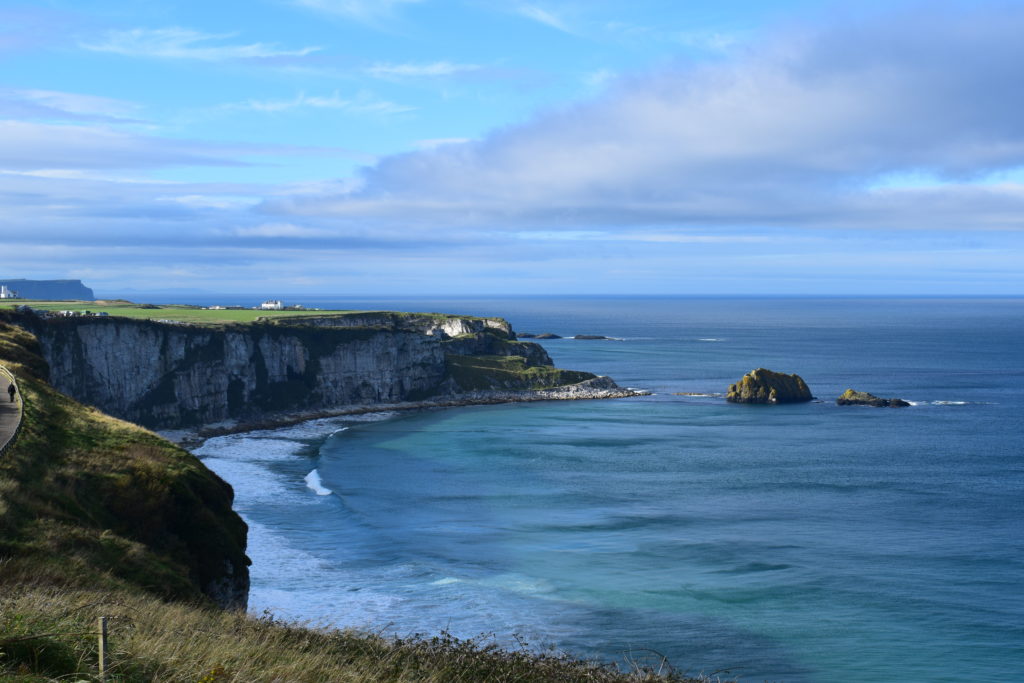 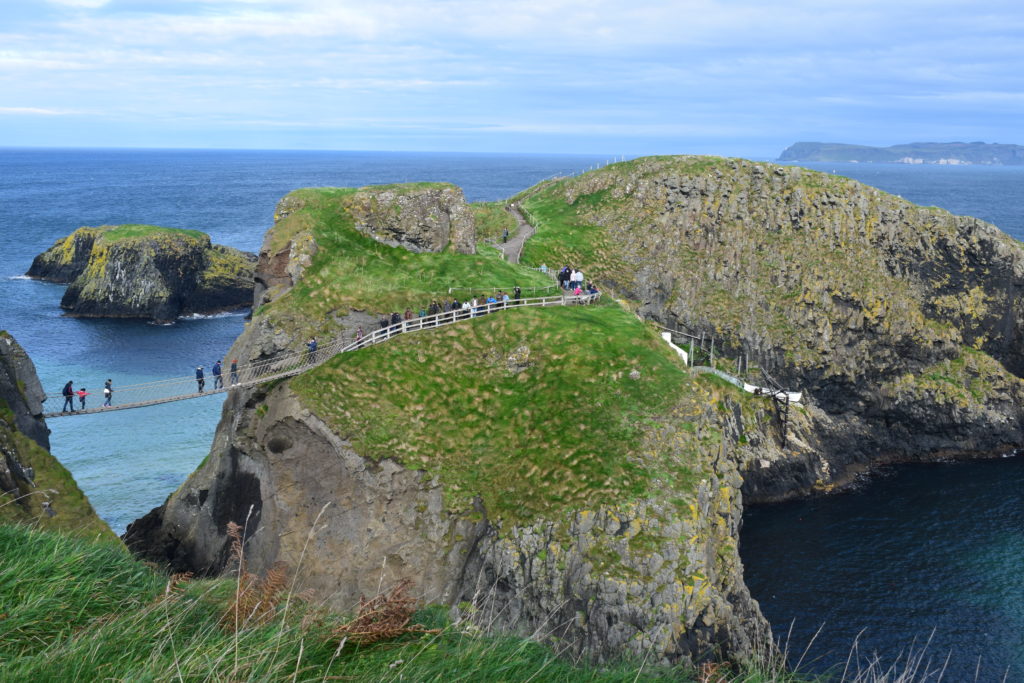 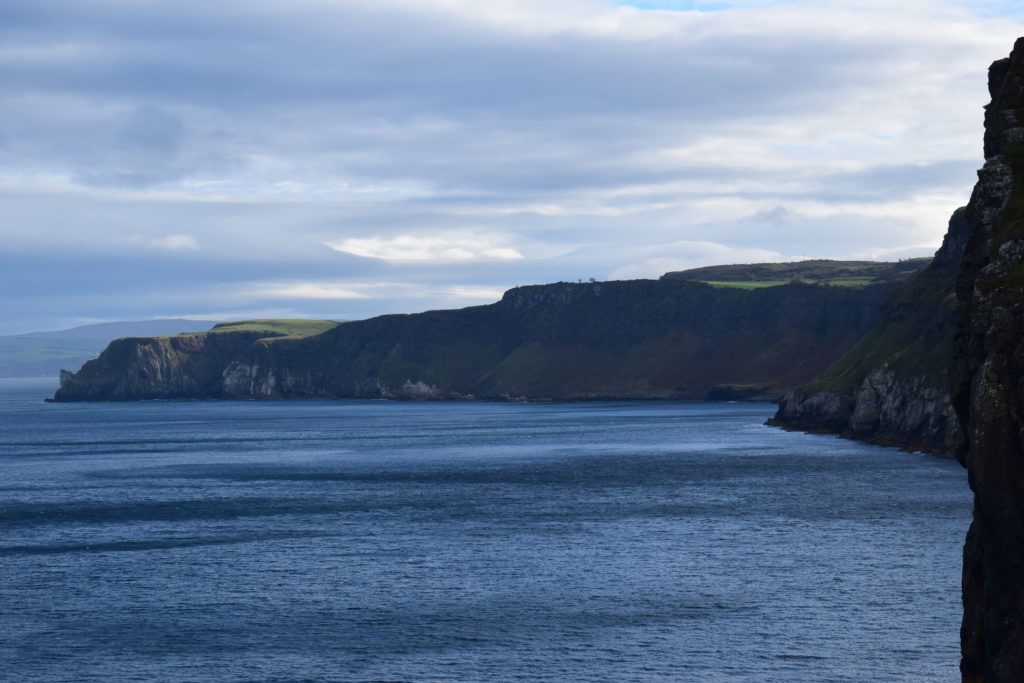 For a good free plan, Belfast Castle is a nugget! Located in the north of Belfast, near the hill of Cave Hill, this castle was built in 1872 in a Scottish style to replace an ancient castle built by the Normans seven centuries earlier. The entrance to the castle consists of a sloped driveway for cars, another for pedestrians, with in the middle a park of a bright green. A few meters farther, we can observe Belfast from above despite the fog very present at this time of year. Once at the top we arrived in the courtyard of the castle, formed of small gardens. As the night falls early, the castle was illuminated from the inside, making the view even more beautiful. The visit to the castle is free. However, some rooms may be privatized for weddings. That was the case during my visit.