Live Canada outdoors Amidst the forests, mountains, fjords, glaciers, streams and lakes covered in white, frozen to several degrees below zero. And, to be sure to take full advantage of the beauty of the Canadian nature, chain discovery on Discovery, why not conquer the territory during a snowmobile raid in Canada? The adventure promises you new sensations!

Here is the top 7 snowmobile raids to try absolutely when you are visiting Canada! Where to go? What to visit? What should I do? We tell you everything… 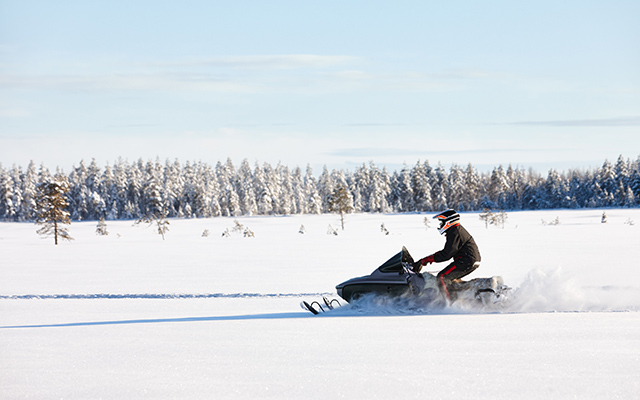 An authentic ride in the Saguenay

Snowmobiling in Saguenay, a city located in the Saguenay-Lac-Saint-Jean region of Quebec, allows you to combine discovery and recreation. Between the eponymous fjord and the Horst of Kénogami, you will have the opportunity to enjoy beautiful trails along the St. Lawrence River, to discover the Amerindian culture in Wendake and of course, to rejuvenate you in Cape in the Leste before continuing The adventure.

Anse-Saint-Jean and Sainte-Rose-du-Nord are the names of the two villages by which it is imperative to pass when riding a snowmobile through Saguenay-Lac-Saint-Jean. If the first is distinguished by its steep terrains, conducive to many alpine activities (skiing, climbing, hiking, horseback riding, sleigh rides…), the second captivates visitors with its extraordinary panorama overlooking a beautiful valley Agricultural, its meandering paths and above all, by the picturesque charm of the meadows surrounded by mountains and forests. With a little luck, you may have the opportunity to listen to the incredible stories of Laurent, the local popular storyteller.

Apart from these two villages, there are also the Valin Mountains, a popular destination for experienced snowmobilers. In fact, this national park offers you about twenty summits that culminate at least 1000 meters above sea level. Of course, it is an expedition that deserves and the ascent is worth to the adventurers efforts and some aches. But rest assured, once at the peaks of these white rocks, the view at 360 ° on the majestic Saguenay Fjord and the valley of the ghosts is a reward that has no price… 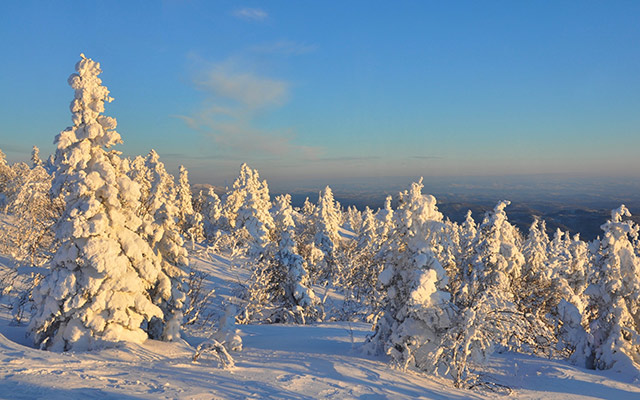 To vary the pleasures, you can also reverse the program: Take the day to relax and be happy, and go out in the evening to experience an authentic 2 H night course on the handlebars of your skidoo. Since recently, rider at night has become a real trend and no 33 000 kilometers of trails of the Saguenay escape!

In less than ten days, you will have taken advantage of the best in the Quebec region. At the counter, you will also have totaled more than a thousand kilometers of snowmobile trails. To finish this journey in beauty, don’t forget to visit Montreal with its parks, streets and historic areas before embarking on the plane for the return trip.

An adventure on the shores of the eminent St. Lawrence River

This pretty intense snowmobile raid lasts eight days in total. On the handlebars of your snowmobile, Le Charlevoix, Quebec’s historic region, offers you the most memorable winter outings. Fjord, mountains, lakes and various activities await you there.

To begin with, the sweetness is the watchword: You start the journey by discovering, in the long, wide and across Montreal, the capital of Quebec. The next day, it’s time to get ready for a real raid by getting acquainted with the powder. On the programme: snowshoeing, visit of the places steeped in history of the region, a dinner in a hotel-museum…

Once you arrive in Wendake, the Indian Reserve is a hundred kilometers of trails waiting for you to join the largest illuminated alpine ski centre in Canada, Stoneham. This step is ample enough to accustom yourself to riding a snowmobile while enjoying the Laurentian Mountains, the boreal forests and the Montmorency River. 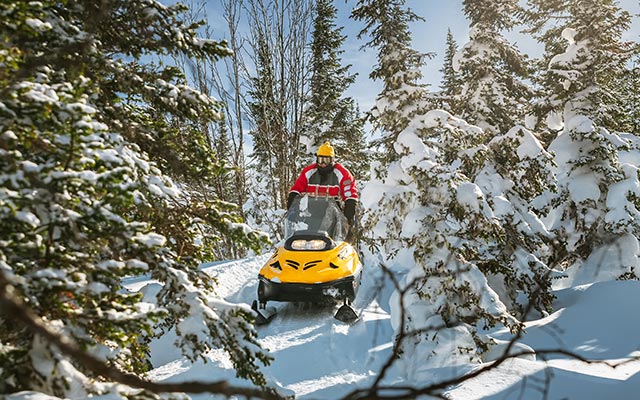 The idea is to prepare for the next stage: The Great snowmobile Day to the Laurentian Wildlife Reserve, which is one hundred and thirty kilometers away. An adventure that marries to perfection discoveries and sensations of driving. Needless to say, on board the snowmobile, the pleasure is at the rendezvous! The Laurentian Wildlife Reserve has more than 2000 lakes and some 30 rivers. This is the ideal place to hunt and indulge in the famous white peach.

Your snowmobile raid will then lead you to the Charlevoix region. About two hundred kilometers from the Laurentians, there is a place that will delight the fine palate: the landslides.  Nestled in an asteroid crater, this unusual village is considered one of the cradles of traditional Canadian gastronomy, making it a must-have on a snowmobile trip to Canada.

Too often forgotten for the benefit of winter activities Canadian flavors are rich and varied. Apart from the legendary maple syrup, the fricot, the sea pie, the Putin, the tourtière, but also the beers (Molson Canadian, Labatt Blue…), are all delights to discover to feast your taste buds!

To be caught by the beauty of the Charlevoix region

Venturing into the Charlevoix region is to enjoy the best of nature between rivers, mountains, forests and histories. Probably because the captivating region is part of the global network of biosphere reserves.

So, if you want to be inspired by the beauty of this area, you will be offered an ideal tour to the handlebars of a snowmobile, the best way to combine sport, stroll and winter adventure in Canada. The circuit begins and ends in Montreal, the second most popular city in the country, passing through different sites captivating each other. In total, the course is about a thousand kilometers at most. 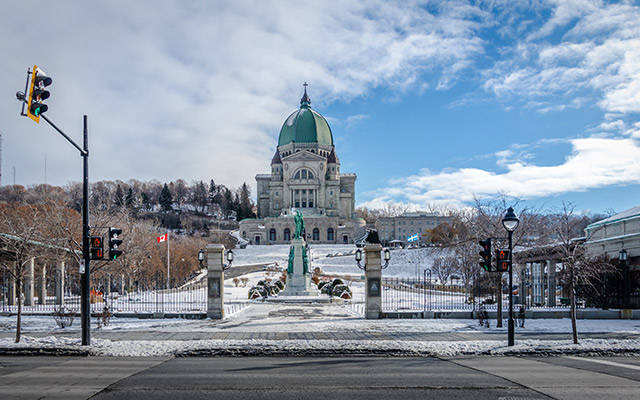 Departing from Montreal, the first destination is Quebec City, the Nordic town. With four meters of snow each year, the area is suitable for all kinds of winter activities, including snowmobiling. This allows you to delve into the history of the local Amerindian communities on the side of Wendake, an autonomous territory located in the heart of Quebec City. Traditional Site site Onhoüa chetek8e, guided tours, handicraft demonstrations, fresco… These are the main programs that are waiting for you.

Then you are invited to grind your snowmobile not without the safety instructions from your coach. The first destination to reach is the municipality of Saint-Aimé of the lakes, then to the north, the Saguenay Fjord. And after enjoying the beautiful white landscapes of the area, you arrive at Anse-Saint-Jean where cosy and warm chalets await you to spend a soothing night near the Fjord. The next day you take the adventure back to the northwest to go up the Saguenay Fjord and reach Hébertville. Along the way, you will surely notice the beauty of Lake Saint-Jean, the immensity of the plain and the beauty of the frozen landscapes.

After Hébertville, your ride continues with a passage through the vast Laurentian Wildlife reserve and a crossing of the Montmorency River before ending in Montreal by going up the St. Lawrence River…

Enjoy the Christmas holidays in Quebec on snowmobiling

It’s the month of December. If for the most part, December rhymes with Christmas holidays and New Year’s Eve, for the adventurers it is a great opportunity to go on adventure land to see the country and meet the world. In doing so, nothing like a year-end in the middle of the white winter in Quebec for a stay between sensations and traditions…

Saguenay-Lac-Saint-Jean presents itself as the ideal destination for an unforgettable Christmas and New Year in Canada. Winter enthusiasts and snowmobilers, you are welcome in the small village of Sainte-Rose-du-Nord, a member of the Regional County Municipality of Fjord-du-Saguenay. Populated by only over 400 inhabitants in a territory of more than 156 square kilometers, Sainte-Rose-du-Nord offers countless winter activities in its sunken valleys, its Fjord, its generous boreal forest, its rich fauna and its numerous Lakes.

As for the Monts-Valin, “The Kingdom of Winter”, you are allowed to enjoy nature in a veritable “snow factory” with more than 5.5 meters of snow on average each year, breathtaking landscapes as far as the eye can see and the inevitable dark blue Fjord. From there, it is eight hours of driving that await you on 150 km of roads to Mont-Valinouët. For this step, don’t forget your camera to immortalize every moment spent alongside your favorite sites.

In Canada, each circuit has its own peculiarity: imposing landscapes for some, unforgettable moments for others… But, thanks to a custom snowmobile raid, developed by experts in the field, you can be sure to make the most of the profit with your gear. This is the case for this loop that begins in Montreal, passing through Wendake, Saint Brigitte and Lake Moreau.

Wendake is the perfect place to know the origin of Canada’s settlement. This is the historic site of the Huron-Wendat, the local Indian community remained intact until today. After this brief appreciation of the local culture, you will truly plunge into a snowmobile raid amidst the conifers of the Montmorency Valley, amidst the Laurentian Mountains.

The next step is to admire the Saguenay Fjord, one of the most beautiful places in the country, then the shores of the St. Lawrence River, and finally, to return to Quebec City to return your snowmobile after several hours of raids.

Pairing sport and entertainment in Canada by snowmobiling

Snowmobiling is the best way to mix discoveries and adventures. Experts or not, many are trying to experience in Canada. This is possible by choosing an eight-day trip to the eastern part of Quebec during the winter season. Nature Reserve, white landscape, frozen rivers… These are the main attractions that await you in these places.

After a few kilometers of impregnation of the driving of a snowmobile, you will immediately take advantage of the course with your machine on the 130 kilometers of slopes towards the fauna reserve of the Laurentians, a reserve known for its immensity, Its spectacular landscapes and thousands of lakes. Crossing the Charlevoix region along the Montmorency River, Anse-Saint-Jean welcomes you with open arms. In this municipality, the circuits of the panoramas are legion like the Belvedere of the Mille, the cove of Snuffy, the path of the poets…

At Anse-Saint-Jean, you are halfway along the route, as Tadoussac, La Balen and Wendake are also among your destinations on the handlebars of your snowmobile.

Living a dream during an off-piste snowmobile raid in Canada

Your adventure begins at the heart of the Laurentian Wildlife Reserve where you will spend the night after you have started more than a hundred kilometers from Montreal. When you wake up, in Criss the region, the splendour of the snowy landscapes between mountains and rivers will surely amaze you as you go off-piste, your ride will combine faster with more or less technical exercise.

On the discovery side, Saint-Aimé-Des-Lacs and Anse-Saint-Jean will be the municipalities that will allow you to distinguish the local culture during this raid. And, on the pleasure side, Lake Moreau and Wendake offer you less intense, but also interesting activities. On the other hand, it is near Lake Moreau that you will spend your night before separating from your snow scooter and heading towards Montreal following the St. Lawrence River.

Remember, before the return flight, you are free to take full advantage of Montreal.