From 30 May to 30 June 2014, 6 friends embark on a roadtrip in the heart of Turkey. Agnes, taking part in the journey, told us about this captivating and long-short adventure in a country full of surprises, discoveries but also in the midst of mutations. Discover the first episode of this motorcycle trip in Turkey narrated by Agnes, traveller and photographer of great talent! 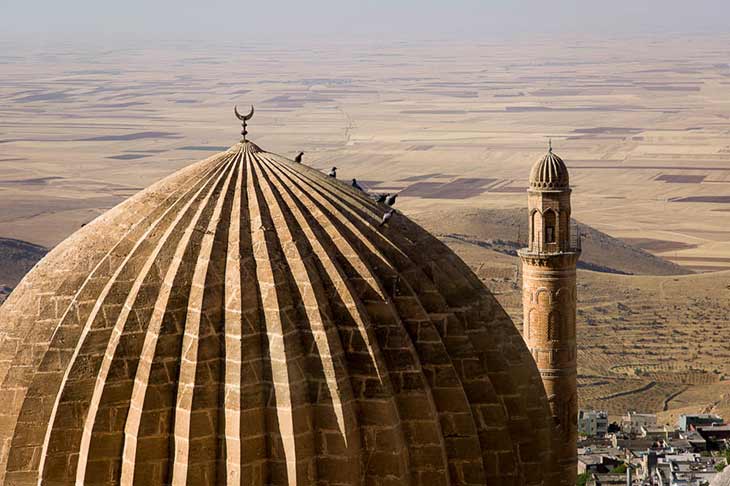 “It’s decided, we’re going to train our friends on a long Trans-Anatolia Journey”

We will go to the Far east of Turkey that we know well, for having travelled in all directions with Jean-Pierre for many years. We will be 6 friends, 5 motorcycles, linked by this common passion of the bike and trips off the beaten path. 2 Harley Davidson Heritage Softail 1995, Dyna Low Rider (rode by Jean-Pierre and myself), a BMW 1200 GS (driven by Alain), a BMW 800 GS (wrinkled by Jean) and a TriumphTiger 800 (rode by Lydia and Bernard). A crew a little disparate, but will remain welded until the end of 8500 kms that we will traverse.

Thanks to the experience gained during our previous travels in this country and knowing the length of customs clearances, we decided to ship the bikes in Greece, in order to get out of Europe and go to Turkey on the handlebars of our gear. 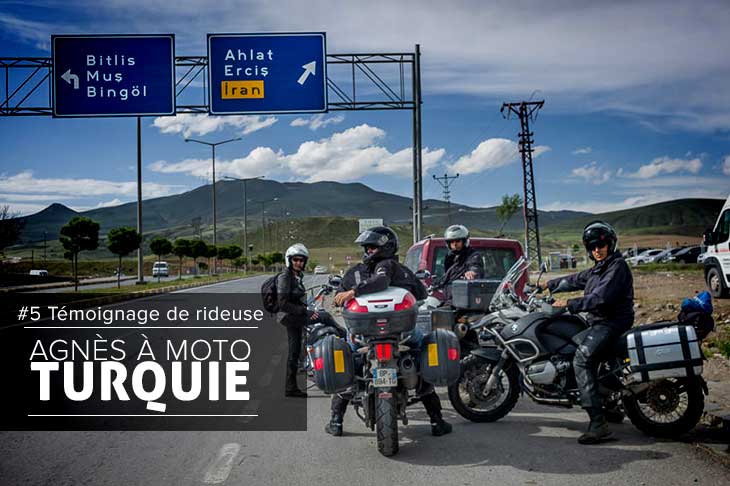 Arrived in Thessaloniki: start of the roadtrip, direction Turkey

We collect our bikes from the carrier, the first stage of 300 KMS allows us to reach Kesan, a little after the border (5 stops and controls, a passage from the motorcycle to the scanner for Alain who he, arrived in Thessaloniki by the road, with the motorcycle loaded In his van and thus crossed the Balkans by the road). At the end of May, we hope for the beautiful weather installed, without too much heat… the rest of the trip will reveal some weather surprises! Jean who does not have rain pants will do the expense…

The second day, long transition stage of 690 KMS will be largely in the rain, violent thunderstorms, which force us to more or less long halts. We will not see much of the presqu’ile of Gallipoli! At the end of it, the ferry on which we embark in Çanakkale, shelters us momentarily, heading south with the hope of a little more sunshine. We arrive very late and rinsed, both senses of the term, in Pamukkale. 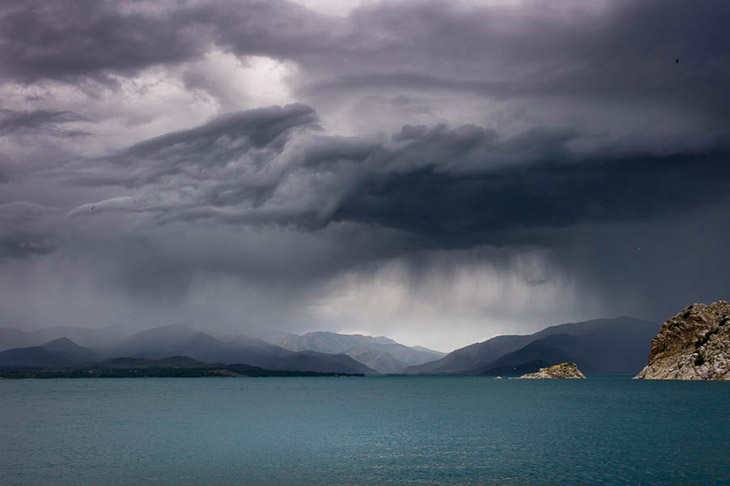 First site, essential, that we show our friends the next morning under the sun, with beautiful clouds that add to the charm of this “cotton Castle” and that of the ancient site of Hierapolis. Short Thinnings, we take the road again under the storm, Jean-Pierre’s motorbike spins on the soggy and grooved pavement, more fear than evil! Superb lighting, with a black sky when we arrive at Hembränning Gölü and its white beaches.

By charming little roads, crossing among other immense fields of white poppies as high as me, we arrive at Sagalassos. Beautiful thinning, before a majestic storm on this ancient site very rich, allow us to stroll between the theatre, the Nymphéa, the fountain, the library… Needless to say, we are the only ones on the site, as will be the case many times, away from mass tourism. We take advantage of this immersion in time as much as possible.

Soaked and sweaty, we arrive at the edge of the lake of Egridir where we stop for the night. After a local dinner made up of delicious Cigara boreks, fish of the lake, fries, we decide by mutual agreement to modify the itinerary originally planned to go south where we hope that the sun will be more present, Cappadocia appearing to be, She too, in violent thunderstorms in the days to come.

So Antalya is led by superb, narrow and winding mountain roads that cross the Taurus under the guise of magnificent forests. The “real” bikers give it to heart, while with our Harley we appreciate, at reduced speed, the curves of the road and the landscape. After having avoided Antalya, we arrive at Aldangos, famous especially for its ancient theatre. A little disappointment, a part of it being being restored. 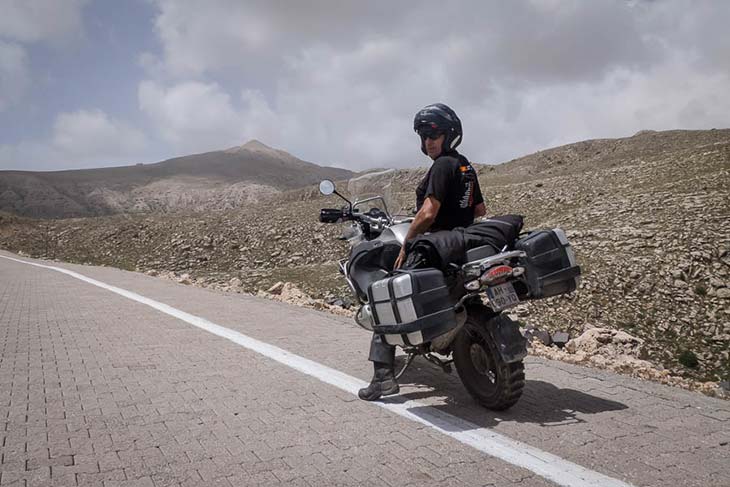 We continue along the coast, surprised by the evolution of this one in a few years, the big hotels and the international resorts, all uglier than the others, have grown like mushrooms!! We are stopped by the police, discussions about our bikes, pictures of these gentlemen on the Harley of Jean-Pierre, exchange of addresses, Facebook… without even having looked at our papers!

The road to Anamur is a magnificent lookout over the sea below, numerous photo stops, tastings of local products, especially delicious small bananas whose plantations abound in this warm and humid region. We stop in a nice little hotel on the beach, walk in the moonlight, but the evening is fresh, I took out my little jacket.

The landscapes are reminiscent of the Cevennes, the Causses or even the US! 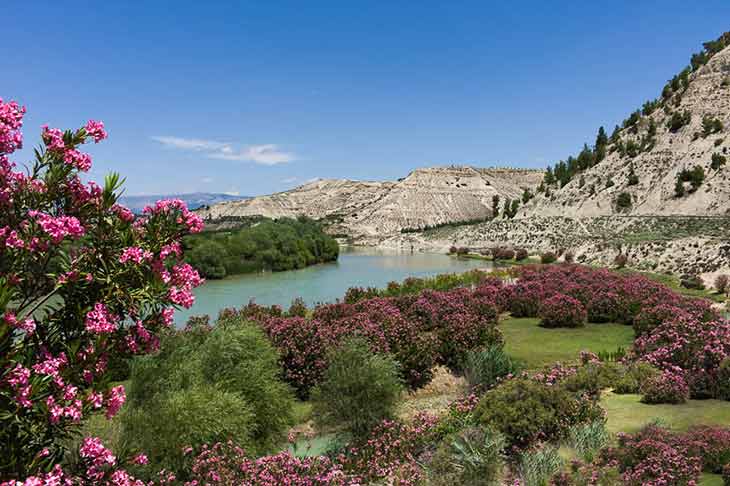 The stages of the coming days will be from 250 to 350 kms, ideal to enjoy our stops and not arrive too late at the stage. Rather than pursuing by the coast, we make an incursion inward to visit the monastery of Alahan and the site of Uzuncaburç. The road is beautiful, of none will say that it reminds those of Cevennes, the Causses, further that of the grandiose landscapes of the U. S!! For many KMS we follow the jade Color river, lined with pink laurels. The “real” bikers let go of the gas, we will find them further. The evening stage is on the seaside in Silifke, facing the immersed castle, illuminated in a very kitch way after the sunset, in pink and red firecracker!

After a hectic start by the fall of Bernard by taking out his motorcycle from the sidewalk, followed by that of Jean-Pierre came to lend him a hand, a stage essentially motorway, with many trucks, buses, which we had avoided the past days.

Jean made us the blow of the breakdown in the tunnel, after doubling a truck near Gaziantep, he was very scared and we also retrospectively! After a thorough check at the Stop service station, nothing particular of detected, is this a gas vapor overpressure in the tank with particularly high heat today? We take the opportunity to have our bikes washed: Snow in Gazientep, the bikes are completely covered with thick foam, it is the washing “Turkish”, we have narrowly escaped the passage of the broom brush! 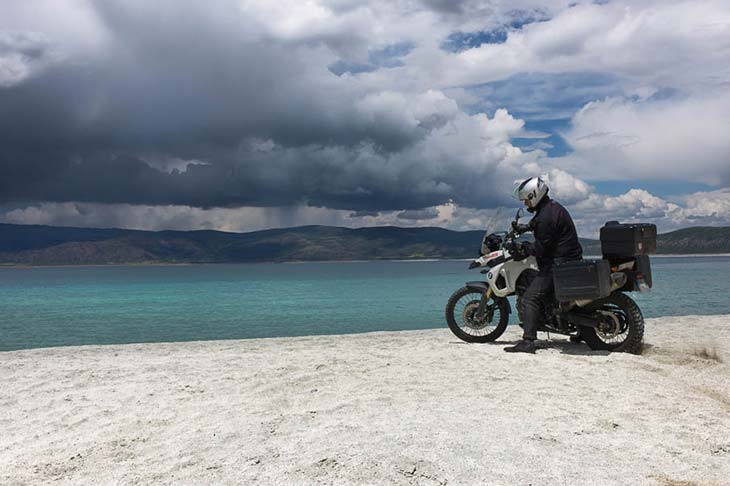 We arrive on the shores of this mythical river that is the Euphrates in Halfeti for a private boat trip in the late afternoon, the ideal time to enjoy it to the fullest with a superb light! Refreshing bath for all,… but surprise to go back: The relatively large boat, from where we had plunged, does not have a ladder! We will refuse to pay the entire amount agreed upon to mark our discontent.

In Motorcycle road-trip, we cross sites over 12 000 years

The next day, exceptional visit of the site of Göbekli Tepe, difficult to realise that these megaliths were erected 12 000 years before our era and that only 1/10th of the site has been updated! The stage ends at Sanliurfa that we love, we are then only 20 kms from the border with Syria, hard to imagine that tragic events happen so close… 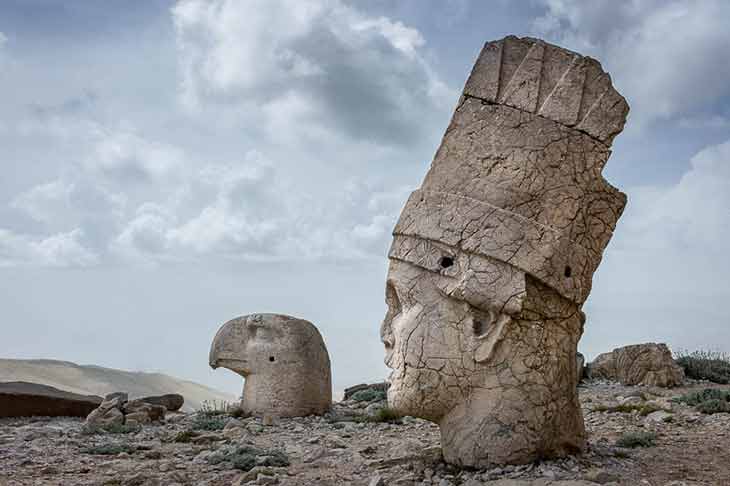 After a stroll in the bazaar, one of the most typical of the region, we go to Balikli Göl, where we wipe downpour rain and hail, again! Memorable evening we spend with a dinner/evening show: Orchestra and Dance with the natives, we are the only tourists. We share with them a gargantuan meal: lentil soup, yogurt wheat, various kebabs, honey and pistachio pancakes, ayran, and finally, raw and spicy meatballs prepared before our eyes…

We will not miss the famous Nemrut Dag, where throne at 2200 m, at the foot of a huge mound, heads laid on the ground, monoliths more than two meters high. The ascent is a little tricky with our Harley on a road/track somewhat gullyed by the thunderstorms of the previous days. We’re going through lunar landscapes, a little foggy. Only on the terraces with all the time wanted we take full advantage of this exceptional site. We go down and cross the Euphrates with a small ferry. Here again, sumptuous landscapes of basaltic plateaus, mineral universes and green meadows where many flocks graze. We stop for the night in Diyarbakir, a city that has literally exploded in recent years with the arrival of Kurds driven from their eastern villages. 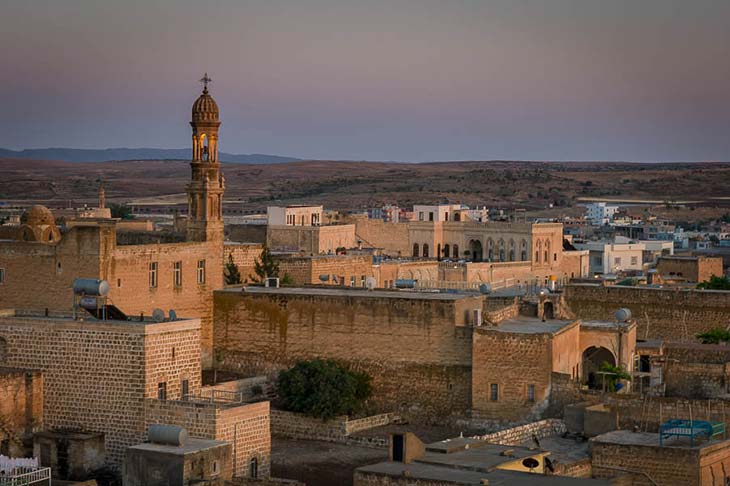 Story to follow! For the next episode, we will follow Agnes ‘ team on her way to the east of the Middle East, set up a few motorcycle galleys like making great discoveries and beautiful encounters.

How much does a motorcycle trip cost? 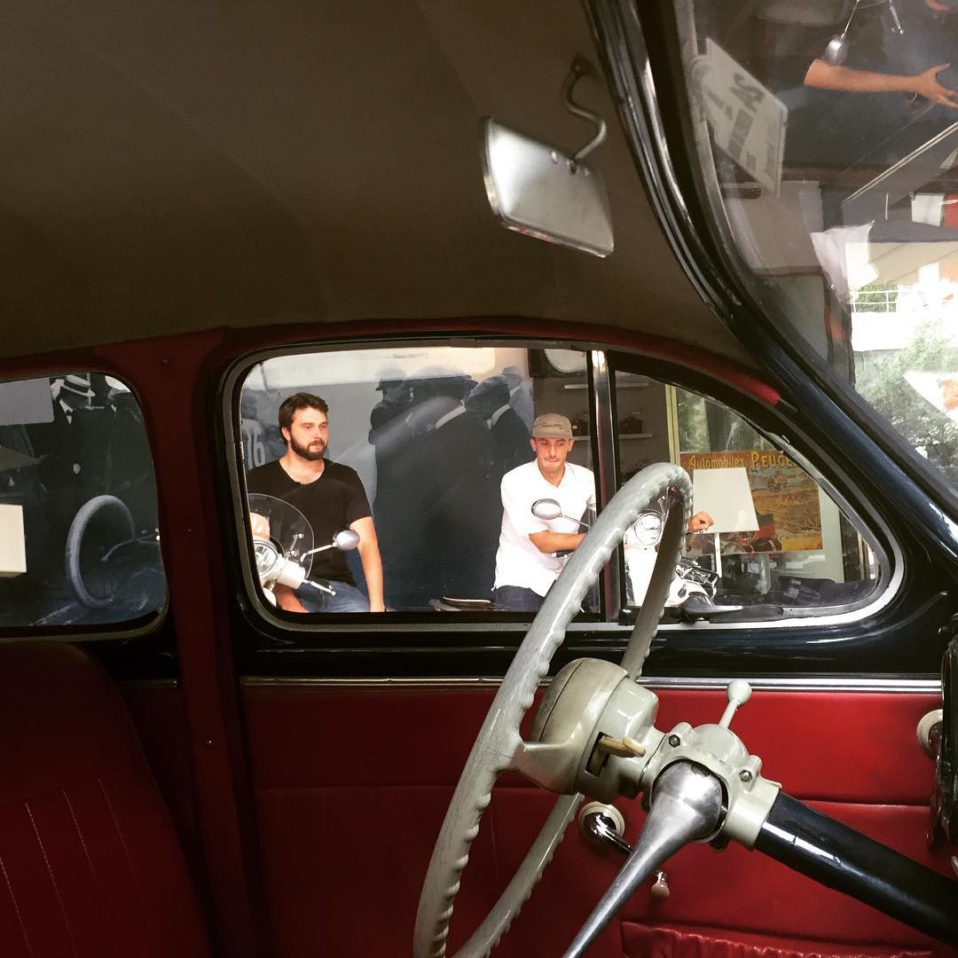 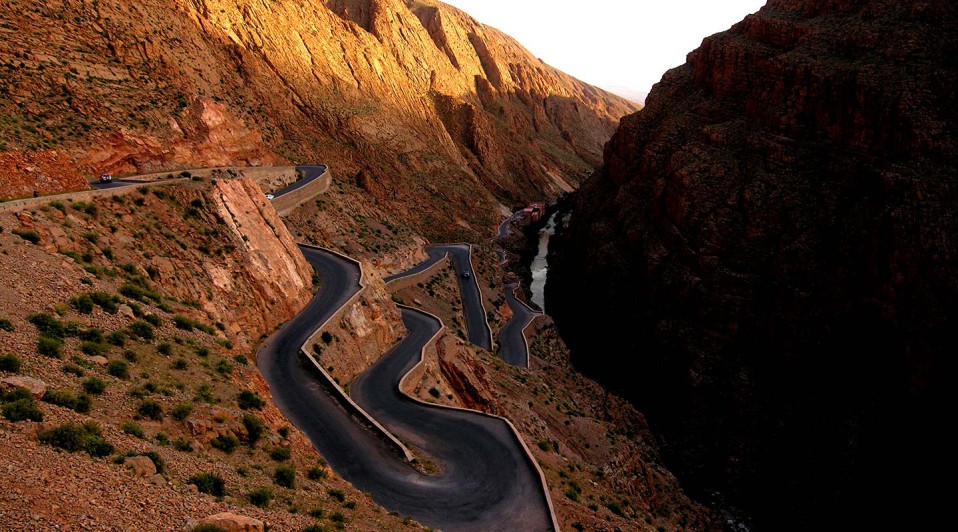 The most beautiful route of the week: The gorges of dades in Morocco 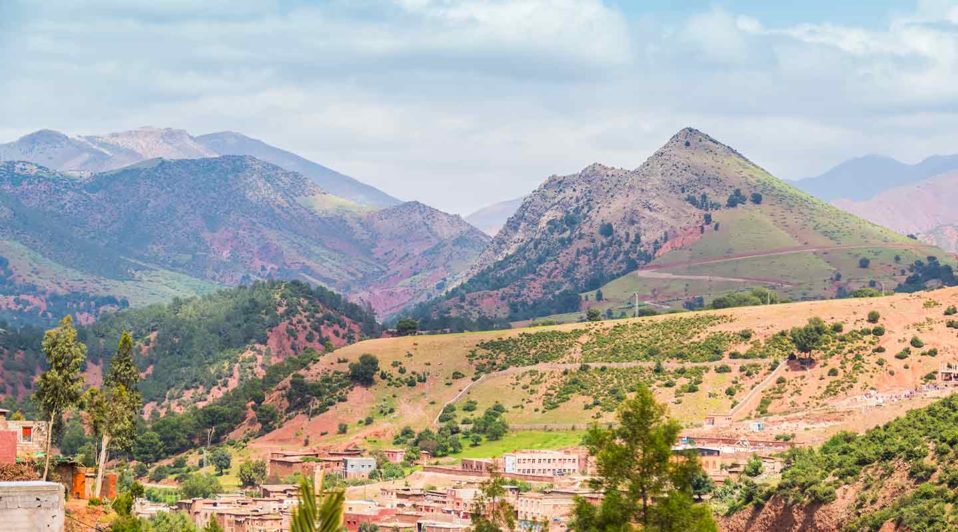